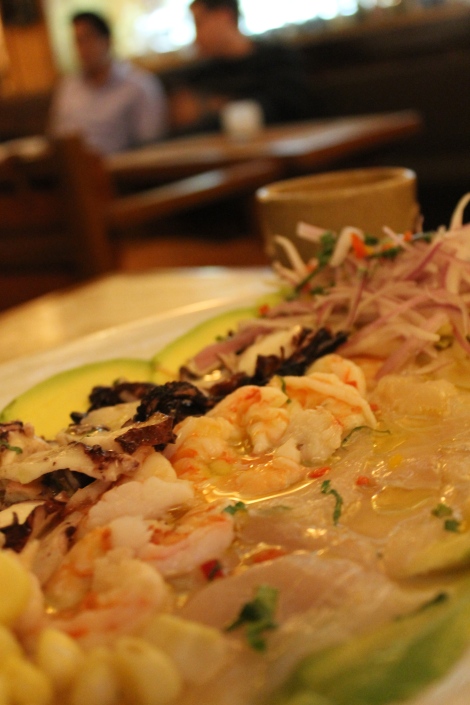 The modern version of ceviche at Brujas.

**** March 2015 — this blog posting got translated and re-blogged on a luxury tour site: in Spanish and in Portuguese. Thanks to Intiways for finding my blog and teaching me the correct Spanish translations! ****

Peru’s cuisine is the megastar on the international food scene. Lucky for me, I have a friend in Lima who took me on a personal food tour. Here are the highlights of a weekend eating tour of Lima. Buen provecho! 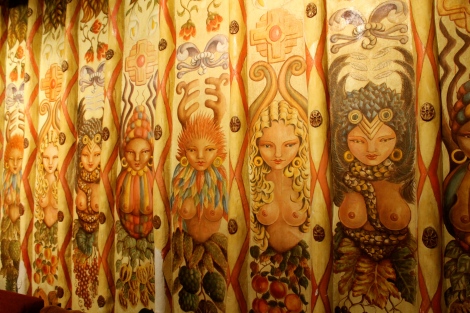 Friday night: Eat at Brujas de Cachiche. It might be my new favorite restaurant (their franchise, the Brujas de Cartagena is not a good copy — go to the original). Brujas have a white table cloth area for more formal dining or dates, a lounge with low slung comfy chairs for chatting with friends, a nightclub area upstairs, and a wine cellar for private dining amongst the amphorae. The menu is huge and includes an array of Peruvian cuisine, both traditional, and presented as “taster” platters. The decor is festive and because Limenos eat dinner late, you can eat a full dinner at 11:30 at night. 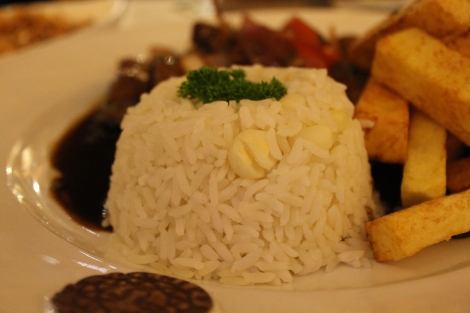 Try the pisco sour and the pisco maracuya (passion fruit). The “ceviche asiatico” with seafood is a visual and gustatory blend of the traditional Peruvian ceviche and Japanese (from the Peruvian Japanese community) sashimi. From the Peruvian Chinese community, you could try the “lomo saltado” or stir-fried beef which includes French fries as one of the stir-fried vegetables (of course, the potato is from here so meals include both rice and potatoes!). Try “picarones” for dessert. They are donuts. 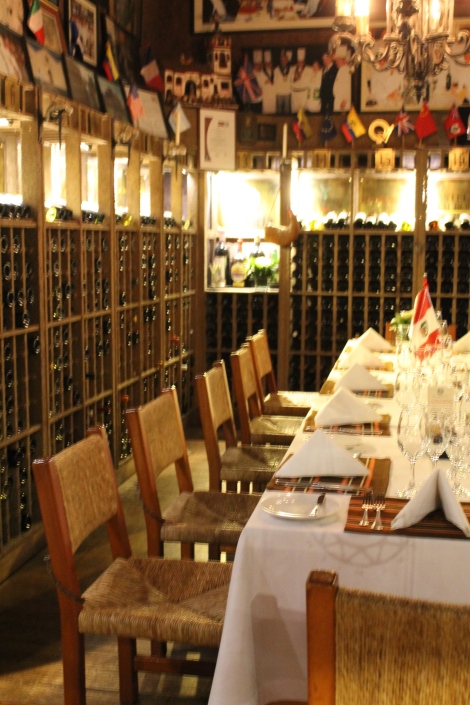 The wine “cellar” at Brujas. 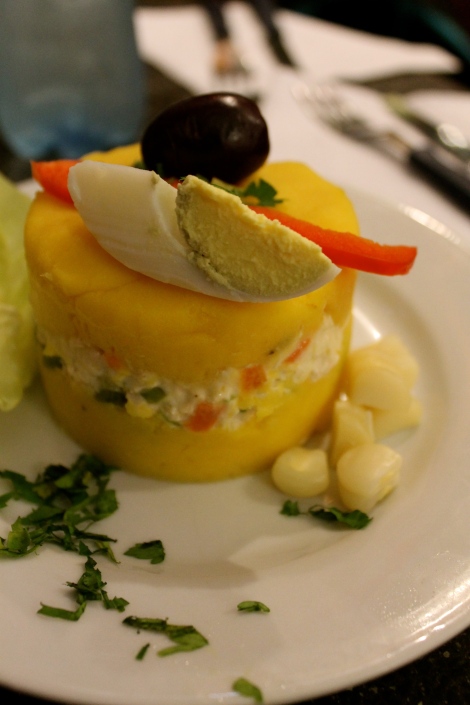 Causa, a savory mash of potatoes.

Saturday noonish: After some coffee or espresso (lots of Peruvian Italians here too), make your way to the Plaza Mayor or main square. It’s very attractive and perhaps you’ll catch the changing of the guards at noon at the presidential palace. From there, wander over to Cordano’s a restaurant frequented by civil servants, inexpensive and with the feel of an Italian bistro. Try the “causa” which is a mashed potato lasagna or mash with many layers. Don’t be put off by my literal translation. The potatoes used are special yellow potatoes and they are mashed and flavored. It reminds me a bit of the Turkish meze, Jordanian mezze, or Bangladeshi bhorta. Perhaps, have a pisco sour at the place where it was invented? It was invented at the Hotel Maury. 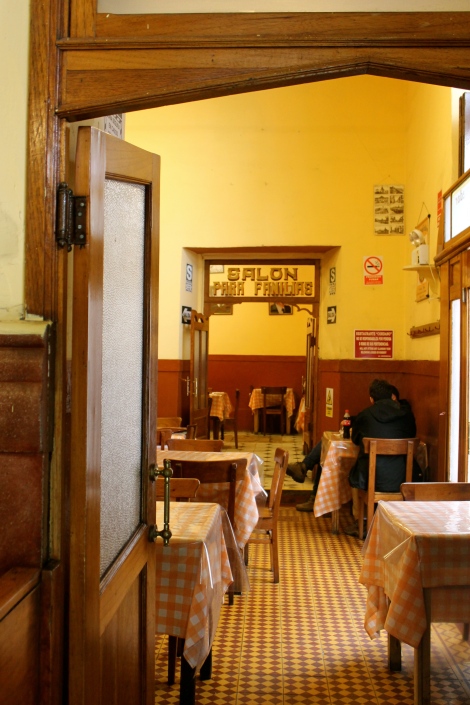 Saturday lunch: After visiting the Church of San Francisco and the Palace of Torre Tagle (with the famous overhanging balconies), head over to the Museum of Food which is housed in the Old Post Office. While this museum could do with a Gaston and Astrid (the internationally acclaimed chef pair) restaurant and shop, the displays are interesting. In the museum, you will learn about “pollo a la brasa” or rotisserie chicken, and the cultures that influenced Peruvian cuisine including “Oriental, European, African, and Moorish” (Japanese/Chinese, Spanish/Italian, African, and Arab/Middle Eastern). 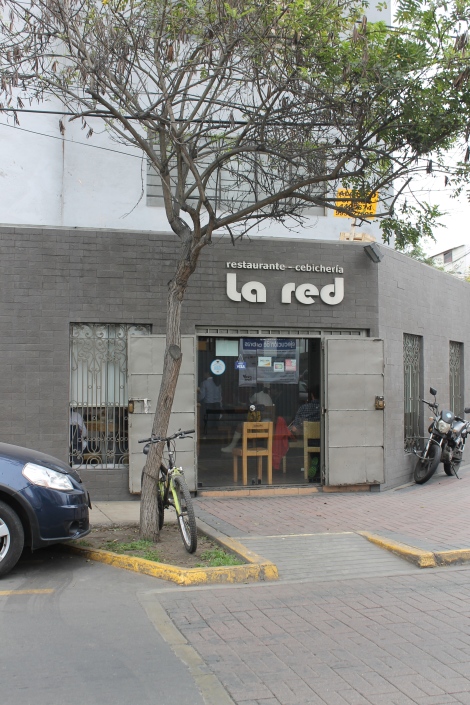 Then, with whetted appetite, grab a cab (yup, there’s an app for that) and head to La Red for lunch. This restaurant was started by a lady who wanted to serve ceviche to the mechanics who worked in the garages located in this part of town. Now, of course, the area is gentrified and the restaurant is run by the lady’s sons. Try “chicha,” a corn drink which tastes like mulled wine without the alcohol. Try the “ceviche classico” here. At 32 soles ($12), I would eat this every day if I lived nearby. 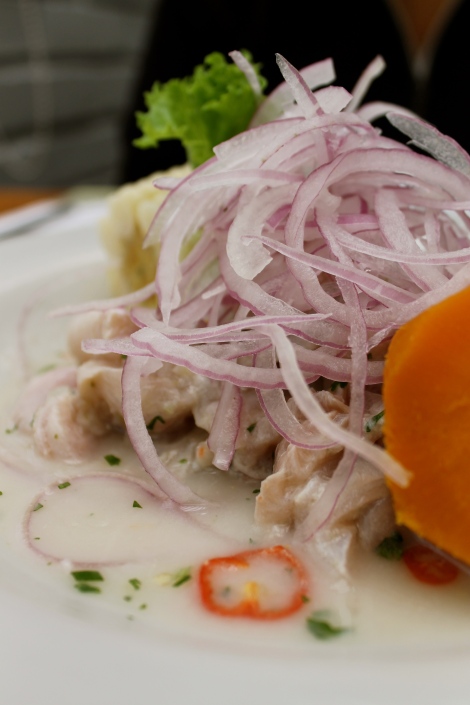 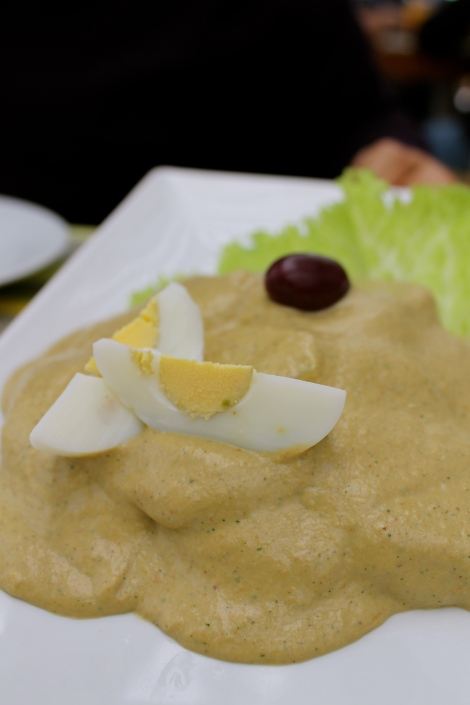 Also, try the “ocope” which is like “papas a la huancahina” which is one of my favorite potato dishes (it’s a spicy deconstructed potato salad which is served with hard boiled eggs and olives). The ocope sauce has vanilla and peanuts in it which makes it a utterly new sort of flavor in a savory dish. Also, try the “chupe de camarones” which is a hearty seafood soup served with a fried egg on top. I really liked the “tiradito” which is a modern ceviche with sliced fish and Peruvian sauces on top. I also had juice of the “aguaymanto” fruit. Pricy but nice. 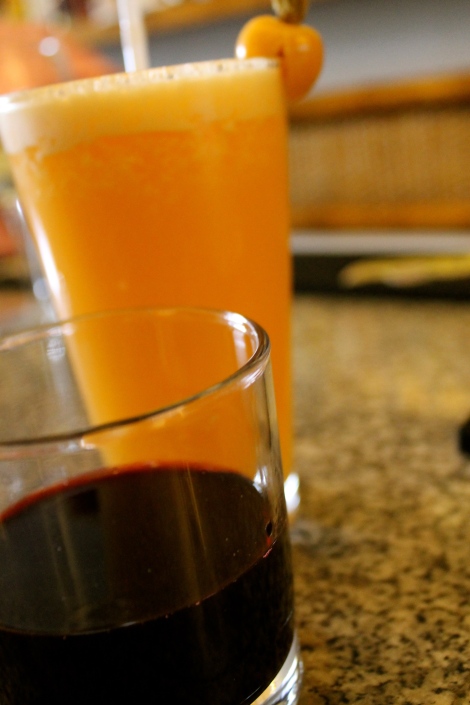 Chicha and, of course, a fruit juice. 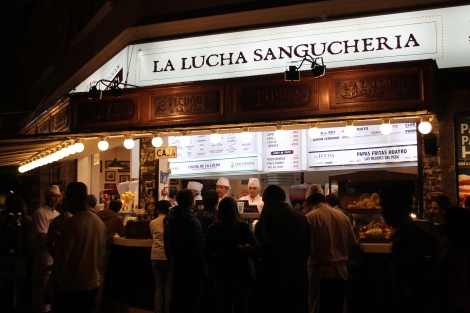 Where the students are…

Saturday early evening: After a siesta, go to Parque de Miraflores for street food. I had, I think, “mazamone morade” which is sort of like a warm tapioca pudding. Like warm jam. 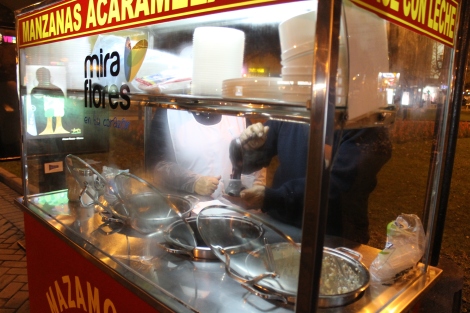 Try a “sanguche de chicharron” and a “sanguche de jamon del pais” both of which are pork sandwiches (sanguche is how they’ve peru-sonalized the word sandwich) from the famous “sanguche” chain. Also try their french fries called “papas huayco” which are a specific type of thick cut fry (recall that the potato was invented in Peru). Having such a specialty fry is like Five Guys in the U.S. where each store tells you, daily, the provenance of the spuds being fried. 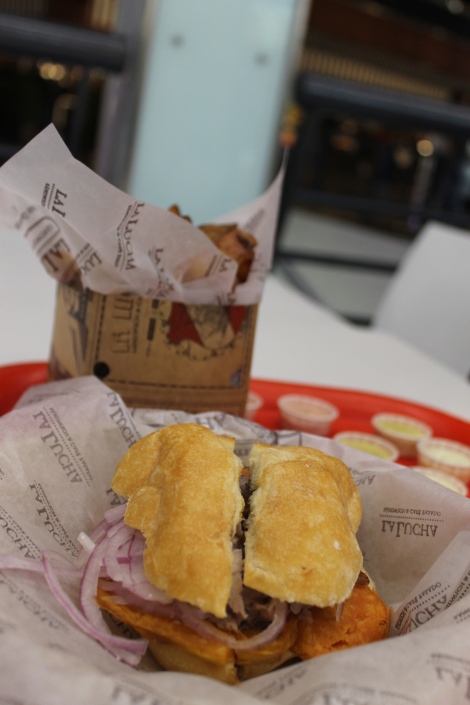 A pork sandwich with yam. And fries.

After gawking at a wedding in the cathedral (they have weddings every hour to make sure that the audience can catch at least one on their way to dinner), have a juice of the “lucuma” fruit which is one of those divine juices that reminds you of why fruit is nectar.

At the Larcomar mall (a modern, clean, and safe hanging garden style mall built on the rock face of Lima’s coast), I tried some of the galactically famous Gaston y Astrid’s desserts. I tried the national dessert (well, one of them), “suspiro limeno” which is like a “fool” in England or a mousse of dulce de leche (caramel). I also tried a chocolate mousse with maracuya fruit on it (the tartness of passionfruit goes well with chocolate). 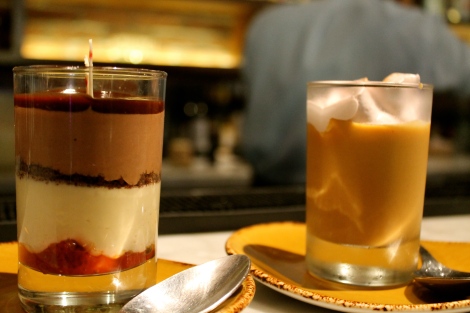 Dessert with a side of dessert.

I rounded off the evening with a “cafe tapade” which is sort of watered down teensy coffee served in a teensy cup. Very wee. In my notes, I also wrote that I had a “palta fuerte” but I have no idea what that was. Good, whatever it was.

Sunday: Eat pollo a la brassa, or rotisserie chicken, at one of the famous restaurants (can’t recall right now, had the word chicken in it), and enjoy a full meal for four people, giant bowl of fries, sauces, and a heavy-weight salad with beets, carrots, and avocados, for around 100 U.S. dollars.

There is so much more, but perhaps I’ll mention them another time. Enjoy! 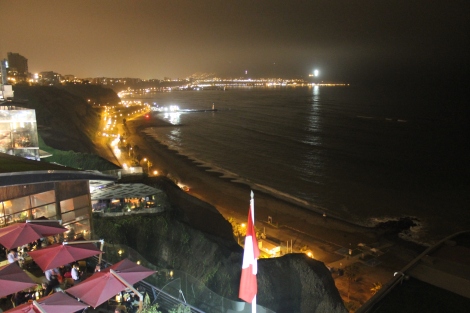 Larcomar mall and the coast of Lima.