Here are some other places that I’ve found that are owned by women. (see addresses for most on my list of 100 places to eat in Lima)
Kjolle: owned by Pia Leon of Central. Open on Mondays.
Matria: the owner also comes out to the dining room to greet people.
La Grimanesa: an anticucho-maker made famous by Gaston Acurio at Mistura.
Señor de Sulcro: one of the institutions.
Las Tres Suecas: three Swedish women own this cafe.
Las Vecinas: Zonia, a Fulbright photographer and Peruvian American owns this place in Barranco.
Kilo: one of the few Asian women in the steakhouse business. She is rare. Apparently she also treats her staff well.
KG: a friend of Kilo’s owner. But the place is not very good.
La Red: Isolina started this place and since then her son has opened La Isolina and Las Reyes in her honor.
La Vaca Negra: a hole in the wall in Barranco where the first generation Chinese Peruvian owner ages her steaks and hamburger meat. Also serves ribs and chicken.
Quinoa Cafe: healthy cafe owned by women.
La Bodega de Trattoria Membrino: one of the classic places started by a woman who turned her dinner party hostessing skills into a business.
Aji555: owned by a Thai woman.
And a few other mentions:
Dhaasu: Also co-owned by a woman.
Rolly & Co: co-owned by a woman
El Cacaotal, the chocolate library shop: owned by a woman.

But the dog… the special dog of Peru is the Peruvian Hairless Dog or Peruvian Inca Orchid Dog Breed. I do not have a photo (which is odd given how many photos I take — but when I googled “dog” and “animal” in my photos, I got some interesting results — corn — but no hairless dog. The one in the jeans and striped top is a French one, I think) so I include a link here. There are several types of Peruvian dog but the most noticeable is the hairless one.

I first saw one and in an “adding injury to insult” sort of way, this particular hairless dog not only had a skin disease,  but also has a “job” where s/he interacts with lots of people all day long. Actually, maybe the skin condition helps keep people from petting him/her?

The Peruvian Hairless Dog looks a lot like Anubis, of ancient Egypt.

In my part of Lima, I don’t see that many street dogs, but I see many other pooches! There are several dog parks and even a dog fair (I don’t think they sell dogs… adopt! Just accoutrements.) on the malecon.

Some gelaterias even sell gelato specially made for dogs. As I wrote in November, I am predicting that the new trend in restaurants will be dog menus (no, not menus made of dog).

Lima doesn’t seem quite as pooch crazy as Bogota but perhaps it will become so.

Like in Bogota, the vets will make house calls. Dr. Cols makes calls and he speaks English (and canine — oh, and feline and whatever). 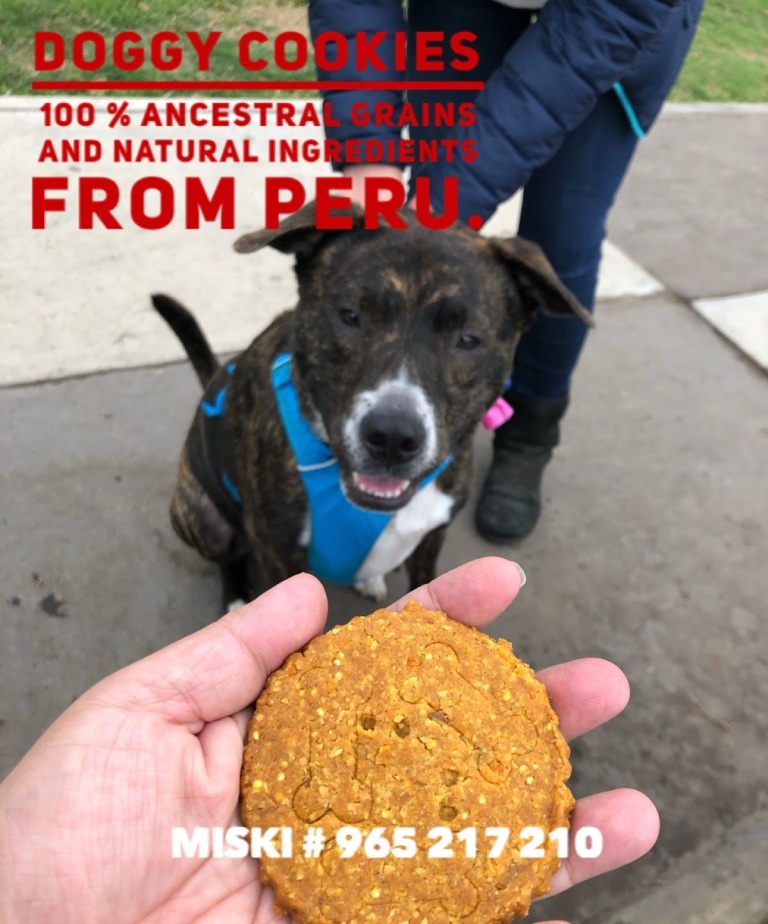 Really, this blog posting was just to show some photos of dogs.

NOTE: I do not receive any monetary remuneration for any of the businesses (like the dog cookie business — get ya fresh wholesome all natural 100 percent ancestral grain puppy treats NOW!) whom I “advertise” (in the verb sense) on my blog. 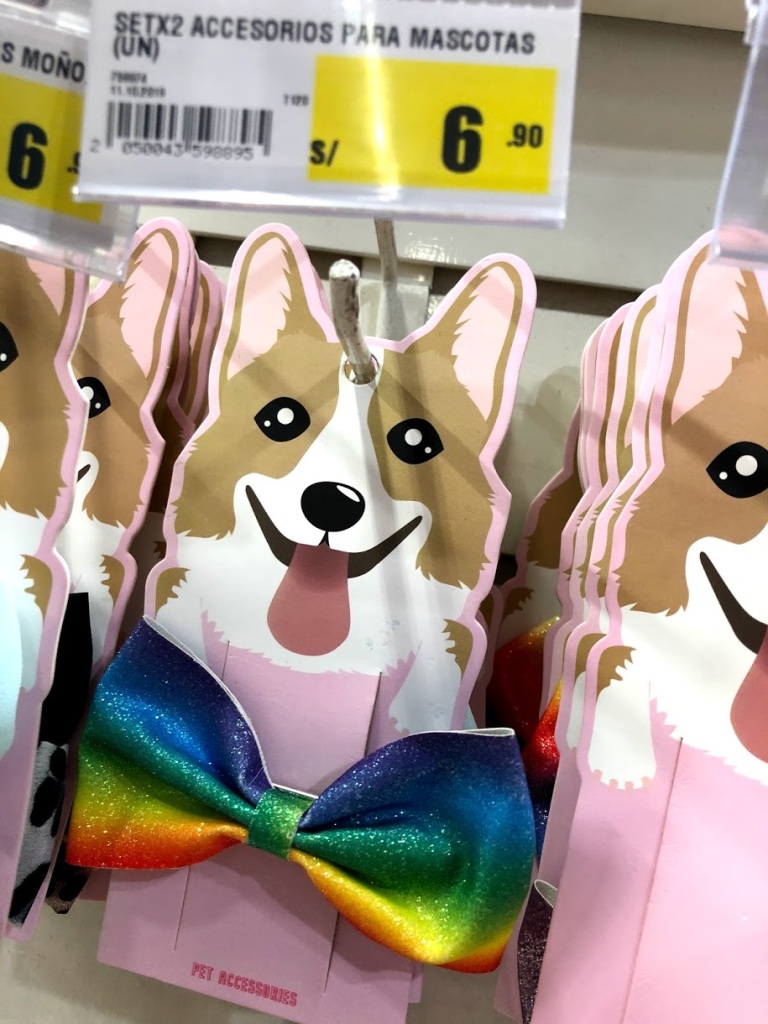 The term for pet is “mascota” in Spanish and aren’t they just?

“Eat seafood at the fisherman’s harbor.” That sounds authentic, cheap, and quaint, no? I allowed myself and a friend to get taken there. 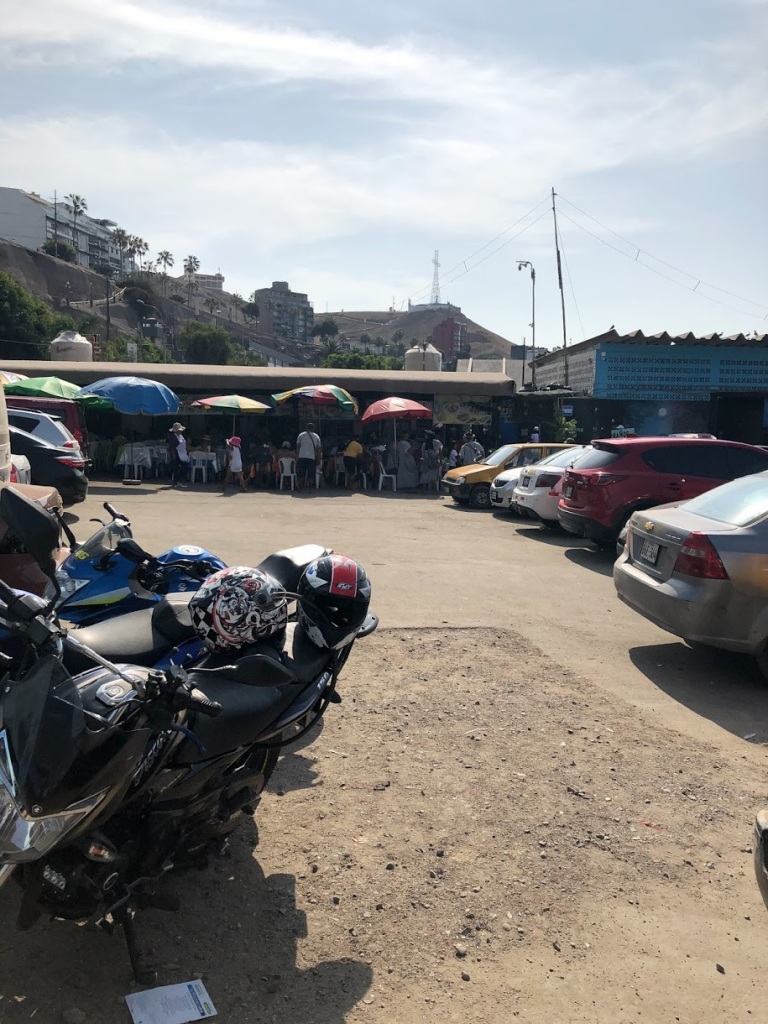 I had driven past this beach and harbor many times. The area is almost always a traffic choke point as the cars going to the Regattas club inch past the millions going to the public beach and Chorillos harbor.  This time, we stopped.

Like in Thailand and Mancora, and other tourist traps, the restaurant ‘sharks’ were corralling anyone who came within the harbor area to eat at their restaurant. Laminated menus with English writing and tatty photos glittering like confetti.

We sat down on plastic chairs and a table covered in a sticky plastic plaid table cover. There were a few other foreigners, crispy pink from the sun, sitting around us as it was early (1 p.m.) but otherwise fairly empty. As we waited for our food, the ‘entertainment’ started. A troupe dressed in jungle costumes and a green yoda-like creature with a painted green body stocking… (note: this was a representation of a real mythical creature from the Amazon — a chuyachaqui) then a sad patriotic clown who set fire to his thick hair… then a guy dressed in a brown monkey mask and brown body fur… At the same time, trinket salesmen and women flogged their goods. At one point a man with the saddest face serenaded us in a gruel-thin reedy voice. At this point, I realized that WE were part of the entertainment. Along with the other customers. It was a hot day but the two ladies next to us were dressed in puff down coats and wool hats. By way of official entertainment, a young Venezuelan guy sang love ballads making the waitresses swoon. The vendors of everything were joined by beggars. 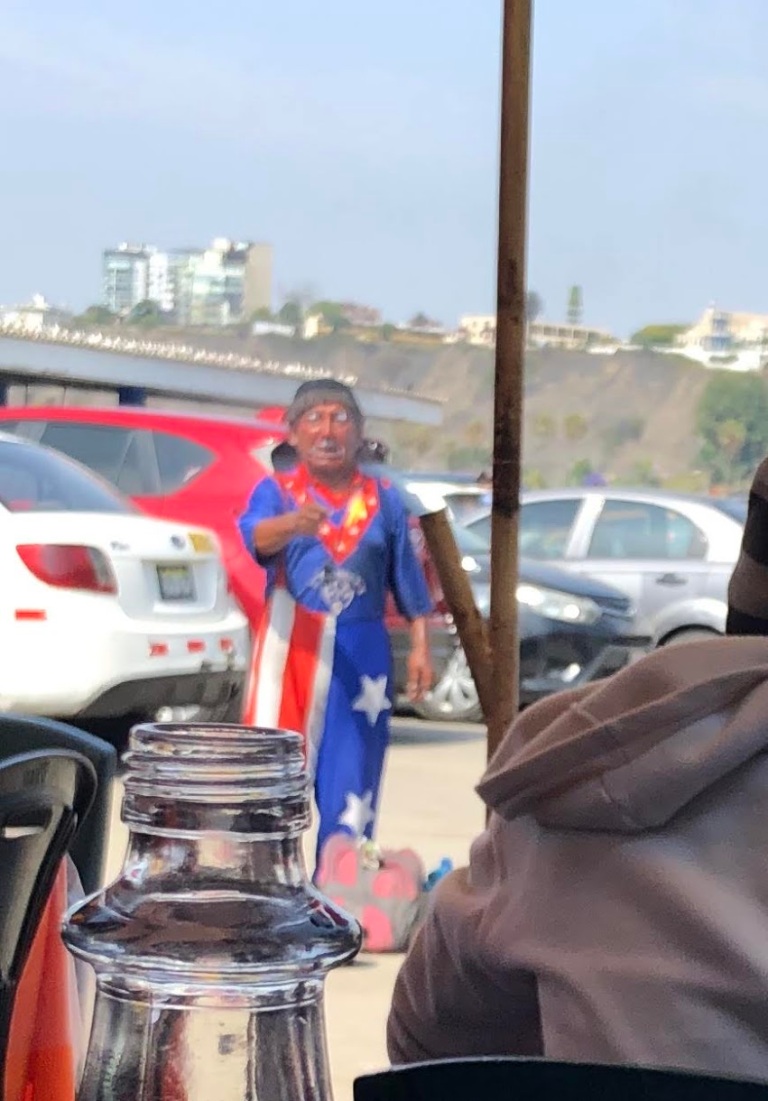 The only thing not offered (to us) was drugs or prostitutes.

My observations were interrupted when the waitress brought the nutcrackers.

For the crabs. My seafood rice was mounted by a half crab with a hard red claw. My fried seafood was topped by the other half (I think, although probably not because only the right claw is big, right?). My friend managed to crack hers sending a grenade of crab shell ricocheting across the table. I tried to crack the other claw. No way was this crab fresh. The claw had petrified. 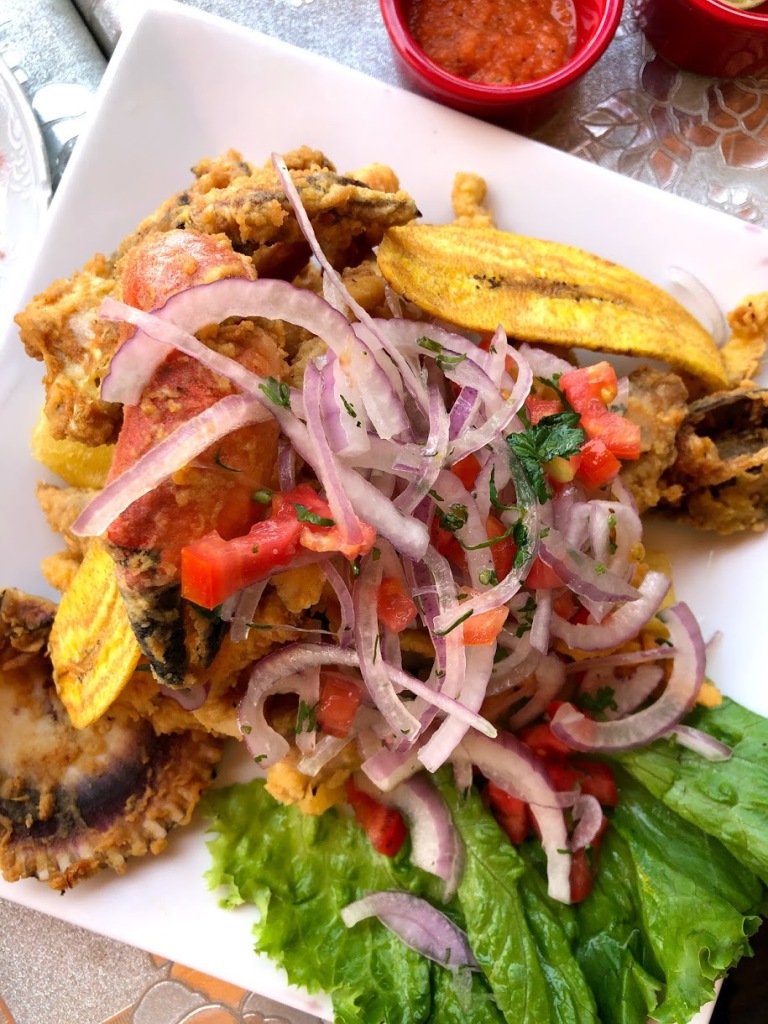 I never felt in any danger at the harbor even when I went to the toilet. The staff in the toilet even wanted to help flush the toilet for me but I’m also used to the ‘water jug gravitational’ method of flushing. Odd thing was that the sink had running water even though the toilet did not.

Later, when I relayed this adventure to my upper class Peruvian friend, the tightness around her eyes told me that we should never have gone to such a place, but she realized that we gringos will do silly things. She would prefer to spare us this touristy experience.

The food was not that good and for three people it cost 132 soles. Not cheap. Not quaint. But I got a blog article out of it.

The friend who went through this with me said, “Is this for your blog? Or are you just trying to make sure that I see the full spectrum of restaurants in Lima?” Two days later, we ate at Kjolle, one mile but three or four worlds away.