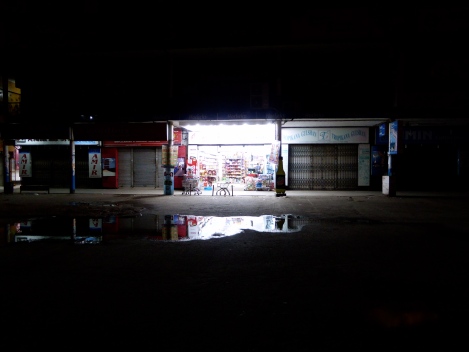 One shop in Gulshan Two was open the day after Eid-ul-Adha.

Empty streets in Dhaka? This year, Durga Puja and Eid-ul-Adha happened within days of each other so the government was closed for several days. The week also included a harvest festival, Wangala, and a full moon. Whatever the religion, many Dhaka-ites went home to their villages to spend holiday time with their families. The result was quiet in Dhaka much like in Europe the day after Christmas. Some businesses were closed for Durga Puja and almost all were closed for Eid-ul-Adha and the day after. By Thursday, a few places opened up again. 7-11 has not arrived in Bangladesh yet (there is probably a 7-11 but it is not the official franchise) but they too would have been busy if they were here. 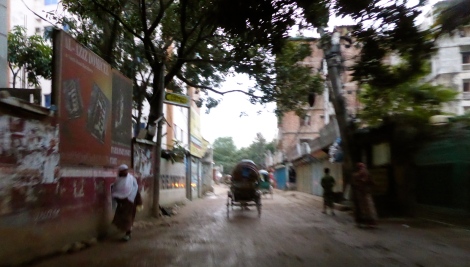 This is “Rickshaw Road” with no traffic. We went fast enough to blur the photo.

This is the most shuttered I’ve seen Dhaka. The result was that the streets were empty. So you could get nowhere fast. Which we did when we went exploring.