Kimchi from Casa de Coreana. I think I like theirs the best.

Arirang (Carrera 14, 106A-86. Closed on Sundays. The sign for the restaurant is tiny. The restaurant is cream-colored house set back from the road. There may be a rooftop area as well.), 12/13: It’s a clean and neat looking restaurant. The food is fairly authentic. The spicy pork belly was flavorful and delicious, and probably the spiciest food I’ve had here other than at the Taiwanese restaurant (generally, people in Bogota are of the “if it’s spicy, I can’t taste it” school of eaters. There is no black pepper on the table ever). The beef lightly marinated in soy sauce (not bulgogi) was a high quality cut of meat and tasty. I asked for the “salsa con sal” and they brought the traditional sesame oil dipping sauce. The kimchi is sour (so, good if you like sour), the banchan includes a red pepper leek dish which I liked. And one of the days, one of the panchan was an egg battered hotdog — and who doesn’t love meat in a tube! The mandu were thin-skinned, meaty, and pan fried. There are lots of stews on the menu and kalbi (beef rib). No haemul pajeon (seafood pancake). The fish stew was fishy. I found all the flavors a little different than I expected but it could be the kind of oil she uses. The restaurant has been in existence for 18 years and the owner said that there are about 4,000 Koreans in Bogota. Oh, and at the table which had two gas burners (thumbs up for the decor and logistics), there is a bell on the table to call for service, and one gets a pitcher of that pale amber warm barley corn tea that I like so much. The owner and the waitress were friendly. This is a place one could bring business colleagues.

Motomachi, Carrera 13A, No. 96-65 (this is a Japanese restaurant) 12/13: This restaurant is two years old. The interior design is my favorite. Wood paneled ceilings and view of an Asian garden. The owner is Korean and she doesn’t speak Spanish so if you want Korean food, you have to speak Korean or Japanese (The tables are Korean style with a gas burner sunken into the center — but the first I was here, I couldn’t make myself understood. The nice waitress didn’t understand that I wanted Korean food — it’s not on the menu — only kimchi is listed as a “cold appetizer”). The chef is a long-time Bogota resident and he is Japanese (but he stays back in the kitchen. The sushi chef is a Colombian). The Japanese sushi was some of the best I’ve had in Bogota. The Korean food is good but it is what I would call Japanese-Korean fusion. It’s light and elegant. No fiery red bowls or raw garlic. The mandu/potstickers/empanadas de japon etc. are good. The bulgogi was more like a shabu shabu filet cooked as bulgogi, and the owner seems to try to recommend that everyone eat this meat as its good. Kind of funny to me. She doesn’t serve a lot of “panchan” or small dishes as so many Korean-food-fans rave about, but what she serves are well done. The kimchi is good but not spicy. The small fried fish were great and the spiced dried burdock root also good. I’ve been there three times so far and each time, the second small plate is different. The japchae (stir fried rice noodles) is good (there are always those that order this just as I always order the seafood pancake). The “haemul pajeon” or seafood pancake is different each time but still good. The first time I had it, it was made more like a Japanese dish and the second time, it was smaller and less doughy. The first time I went there, I had Japanese food and didn’t find the tonkatsu edible but the sushi was fine. I shall be back many more times. This restaurant is hard to find due to all the one-way roads surrounding it so it’s best to walk. It’s located near a small pedestrian street. 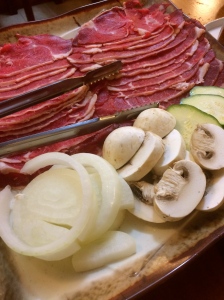 Beef for grilling or shabu shabu.

Casa de Corea – original location (Calle 104A, 11B-61. M-F 12-13 & 6-10. Weekends 12-10.) 11/13: Supposedly, according to themselves, theirs is the best kimchi. I’d agree. The bulgogi is also good, marinated for a minute right before being brought to the table. The seafood soup was mild and warming on a cold night. They brought a ladle and small bowls for sharing. The dumplings, mandu, are also good but are deep fried like an empanada. The Colombian cook has been cooking Korean for 30 years and she is on point. The service is also friendly. Now, I am annoyed that this place is not located in my apartment building. If it was, I’d eat there every day. Prices were average at about 20 U.S. dollars per person. This place is too “dumpy” to take business guests.

Casa de Corea – Previously Deum Jang, affiliated with Casa de Coreana at the old location (Carrera 14B, No. 106-18. M-F 12-13 & 6-10. Weekends 12-10.) 11/13: Supposedly, according to themselves, theirs is the best kimchi. I’d agree. New location is also on a residential street. Inside is nicer and more modern than the original location. There’s a fire pit and a TV on the wall. Cozier. The food is the same as at the other location. This location is fine for taking guests.

Biwon (Carrera 7D, #108A-33. Tel: 215-4773. Closed on Sundays. Also hard to find. It’s in a house on a twisty residential street, and comically, across from it is posted a sign which says, “no businesses allowed.”) 10/13: The bulgogi is actually the best here. Instead of being shaved flakes of stringy meat like most places, here, the strips are like I’d make at home. The meat used is tender and actually has some flavor. The bulgogi is served with lettuce for lettuce wraps. The kimchi was also slightly sour and not a deep red color. The haemul pajeon was thick and soggy. I didn’t find the staff all that friendly. Also, fine for business meals.

Asiari (Cra 18B, No. 108 – 05. Closed on Sundays. Asian fusion. It is really hard to find this street. When going west on 109, look for the red Banco sign on the left corner. Turn left on that street.), 9/13: This place made decent Korean food. It appears to be run by two Korean ladies. The restaurant has various kinds of seating, from the cafe outdoors, the cafe indoors, upstairs private rooms, the shuttered back room, and so on. Plus, the bathrooms have quirky art and fancy faucets. The chicken wings were okay but the sushi roll was terrible. I enjoyed it more than I expected to. They have Korean tea and serve it in a large teapot which I appreciated. When I asked to pay, I was told that they lady in the back had already paid for me. Some strange things are nice.

Maki Roll (Carrera 11, No. 95-01. All days, 12-11.) 6/13: This place also sells some Korean items including the red pepper paste (kochugang) that is distinctly Korean. The meals include a starter of cold marinated chicken wings and small pancake (pajeon). The banchan were inedible. The bulgogi, while a good sized portion, was too chewy. The staff are friendly. This place is a cafe so very casual or, as I noticed, hip enough (all white decor) to attract dating couples out for a nosh.

Senor Kim, Calle 78, No. 12-09 (old address is Calle 39, #18-34. Was also called Mini Nyam Nyam, I think), 3/13: Well, hola Senor Kim! When out exploring, we stumbled across the sixth Korean restaurant in Bogota. They moved in the summer of 2014… so only their Facebook page has the correct address. This is a small caf’ style place. Although this is a new location, it’s dark and cramped which makes it feel a touch old school. Located on a through street between Carrera 11 and Carrera 13. I really wanted to like this place because the young couple who own it are so cute. I think that their best dish is their bowl of rice with stuff = bibimbap. The kimchi was not bad but it was more like a cabbage with red sauce.

That concludes my Korean restaurant search in Bogota. I may have to start cooking at home as delivery (domicilio) doesn’t seem like such a good idea with Korean food.

9 responses to “All the Korean Restaurants in Bogota”